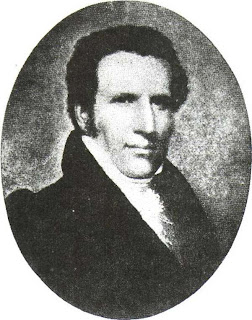 One of the reasons why John Allan may have had tension with his foster-son Edgar Poe was finances. Allan probably never approved of Poe's pursuit of literature, and definitely not his poetry. In one letter to Allan, Poe swears that he's given up on his "Byronic" pursuits (he didn't give up poetry, just his influence from Byron). Allan, as a successful merchant, believed in good business decisions, and Poe was taking a huge risk trying to be a writer. Be a self-made man, Allan would say, just like me.

His mercantile business, Ellis & Allan, did moderately well, though they lost substantial money when they tried to open an overseas branch in England (generally, Poe's five years growing up in England, from age 6 to 11, are shockingly ignored by people trying to determine or replicate his accent). Shortly after, by mutual consent, Ellis & Allan disbanded. So where did Allan's money come from?

Allan really hit it big when William Galt died on March 26, 1825. The Allans, unable to afford their own home, were living charitably in a house owned by "Uncle" William at the time. John Allan, William Galt, and adopted son James Galt were having tea and pancakes that day when, as Allan wrote, "suddenly [William Galt] threw back his head & eyes and seemed oppressed." Galt was dead.

He was also the wealthiest man in Virginia at the time. His home was on 15 square miles of land and he owned real estate in Richmond and Lynchburg, plantations throughout Virginia, sawmills, stock in the Bank of Virginia, and hundreds of slaves.

Galt left in his will about 4,040 acres of land — an estate estimated at $750,000. Almost immediately, Allan purchased a new home: a two-story brick structure with wraparound porches, situated at the top of a hill and commanding tremendous views of the city. Inside, a mirrored ballroom with a hand-carved mantel, a wide mahogany stairway, and an octagonal dining room were fitted with the expensive and extravagant furniture, decor, and artwork. The house was valued at $14,950 (about a quarter million dollars today), located at Fifth and Main Streets — the Moldavia estate would likely inspire "The Fall of the House of Usher." It is no longer standing and only a couple images (including the one at right) are known to exist. Edgar Poe was 16 years old at the time.
John Allan never had to worry about money again. In the years that followed, the struggling Poe would beg for money from his "Pa." Allan only occasionally complied and, almost always, offered less than Poe requested. He was such a scrooge, in fact, he often responded to Poe's letters by flipping them over and writing on the back (as if he couldn't afford his own sheet?). When he died, he excluded his foster-son in his will. But, more on that another time.
Posted by Rob Velella at 8:57 AM

According to family lore, the other reason that Allan did not support Poe was that it was his wife who wanted to adopt Poe after the theater fire in Richmond -- Allan did not. When he wife died, Allan tried to rid himself of Poe.

Hmm... Family lore, as you cite, is incorrect. Young Edgar was already living with the Allan family at the time of the Richmond Theatre fire (more on that a little later this December). However, you are correct in that John Allan didn't want children (though he did anyway, just not with his wife). Still, it's only one of many, many reasons why the Poe-Allan relationship deteriorated.