Poe's final short story (if it can be called that) was published in the June 9, 1849, issue of Boston's The Flag of Our Union. This final published prose work by Poe, "Landor's Cottage," is more appropriately labeled a "sketch." It is now a relatively-unknown Poe work.

The manuscript for this sketch was written much earlier than its first publication. Poe references the work in a letter to Nancy "Annie" Richmond of Lowell, Massachusetts in a letter to her circa January 21, 1849, according to the Baltimore Edgar Allan Poe Society. The next day, coincidentally, Frederick Gleason of The Flag of Our Union wrote to Poe, inviting him to become a regular contributor.

Poe had some difficulty publishing "Landor's Cottage." In September 1848, Poe wrote to Eli Bowen (former editor of the Columbia Spy), who had recently become editor of the Miner's Journal in Pottsville, Pennsylvania. The duo seem to have agreed that the sketch was not appropriate for that journal. He then submitted the manuscript to the American Metropolitan Magazine in New York. By March 1849, the magazine sent it back to Poe, unpublished. A few months later, The Flag of Our Union picked it up and published it with the subheading "A Pendant to 'The Domain of Arnheim'," referring to an earlier sketch by Poe. 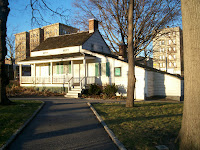 But, what is "Landor's Cottage" about? Mary Gove Nichols, a friend and neighbor of Poe in New York, noted that it was about Poe's time in his small cottage in the Fordham area of The Bronx, New York (pictured at right as it looks today). Modern scholars do not seem to disagree. Nancy Richmond has been identified as the "Annie" in the story, a nickname she later adopted as her legal name. In the sketch, Poe meets Annie and describes her eyes as "spiritual gray" and her hair as "light chestnut."

Certainly, an interesting, if not unfortunate, final prose work — definitely not one which has cemented Poe's legacy (feel free to challenge me on the value of "Landor's Cottage"; I'd love to hear what others think). Only one other new work will see print before Poe's death. You'll hear more about it next month.
Posted by Rob Velella at 10:21 AM