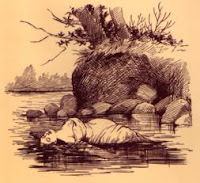 A shocking discovery was made in Hoboken, New Jersey on July 28, 1841: the body of Miss Mary Cecilia Rogers was found floating in the Hudson River. Rogers, a cigar salesgirl in Manhattan, had only gone missing a couple days prior. The discovery of her body confirmed suspicions that she was murdered.

Known for her good looks, she was nicknamed "The Beautiful Cigar Girl." Her boss, John Anderson, had hired her specifically because of that "skill" and asked her to exchange "teasing glances" with his customers. Likely because of this, she had many admirers — including some who published poems about her. She also likely met literary figures like James Fenimore Cooper, Washington Irving, and Fitz-Greene Halleck.

On July 25, 1841, Rogers informed Daniel Payne, her fiancé, that she was going away to visit family; she immediately fell off the radar. When her murdered body was found three days later, she made national headlines. Her fiancé killed himself (using poison) as the investigation went on. The case remains unsolved but speculation includes gang violence and a failed abortion (or, the genteel euphemism, "premature delivery").

Edgar A. Poe, who might have met Rogers at Anderson's cigar store, picked up the mystery too. Reviving his character C. Auguste Dupin, introduced in 1841's "The Murders in the Rue Morgue," Poe fictionalized the Rogers case in "The Mystery of Marie Rogêt," published partly in 1842 and partly in 1843 Now set in Paris, the murder victim worked in a perfume shop and the armchair detective Dupin uses newspaper reports to solve the case. Well, even in fiction, the case is never solved concretely.

"The Mystery of Marie Rogêt" is often critically panned and, ultimately, is the least well-done of Poe's three main detective tales (the third being the fantastic story "The Purloined Letter"). One 20th-century critic called "Marie Rogêt" a "tedious exercise in reasoning" only interesting to "a professional student of analytics." Of course, this was not Poe's first attempt at fictionalizing a real-life tragedy. Much earlier — 1835, to be exact — Poe published the beginnings of his only play, Politian. The play remains unfinished but is based on the so-called "Kentucky Tragedy."

*The image above is taken from the very interesting section on Rogers/Rogêt at the Poe Forward web site.
Posted by Rob Velella at 8:17 AM

(Glad to have been helpful regarding the photo.) Besides that, I have ravenously read everything I can get my hands on regarding Mary Rogers. My take on MARIE ROGET: Dupin considered himself superior to the police. So, next time you read it, try to view the story as a criticism of the media and the primitive police force of the period.

Really its too shocking to find a beautiful girl murdered and floating in the river.She was so beautiful & attractive to bind the customers in her teasing glances that everybody were supposed to smoke a cigar from the store only to have a glance of her.Her eternal beauty even compelled various admirers to write poems on her.Obviously its a saddening event and world lost one more beauty.I think the smokers must be enjoying their famous Cohiba cigars with charming looks of Mary Cecilia.