On November 7, 1825, in Frankfort, Kentucky, an attorney named Jereboam O. Beauchamp fatally stabbed politician Solomon P. Sharp. Beauchamp had been an admirer of Sharp until he heard that the focus of his admiration had allegedly fathered an illegitimate child with Anna Cooke, though Sharp denied paternity of the stillborn child. Beauchamp and Cooke became engaged, but Cooke convinced him to kill Sharp as a condition of marriage. He agreed, and they married in June 1824. 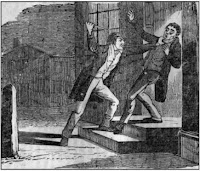 Beauchamp kept his end of the bargain, and stabbed Sharp to death. Only four days later, he was caught and, after a trial proved his guilt, he was sentenced to death by hanging. Cooke attempted to kill herself with laudanum to show her commitment to her husband. Her attempt failed. Awaiting execution shortly after, Beauchamp was visited by his wife in his cell; she concealed a knife on her visit. The two attempted a suicide pact. Beauchamp's jailers found him mid-stab, and rushed him to the gallows so that his conviction be carried through. He became the first person legally executed in the commonwealth of Kentucky. She died shortly after, and the two were buried in the same coffin, positioned in an eternal embrace.

The story became a scandalous national headline, earning the nickname "The Kentucky Tragedy."

Edgar Poe fictionalized the event in his only play, Politian, in November 1835. Poe’s play, left incomplete and never performed, reinvented the true event in the vein of a Greek tragedy. Thomas Holley Chivers also reinvented the true story as a piece of fiction, in his play Conrad and Eudora. William Gilmore Simms and Robert Penn Warren also used the event for inspiration.

Politian is one of Poe's many forgotten works. One contemporary reviewer noted that Poe had great talent as a writer but it was "wasted on trifles." But, his choice to base a story on true crime would be revisited in "The Mystery of Marie Roget," and he would continuously take real-life inspiration for most of his fiction.

*The engraving above dates to about 1835. Yes, this event earned so much widespread attention, it was being turned into artwork.
Posted by Rob Velella at 11:44 AM